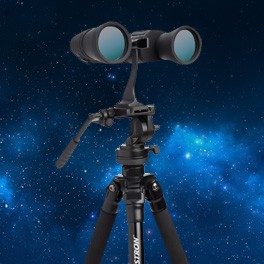 A binocular serves to many uses and is usually the first telescope many people purchase. One of the most aweing uses is for astronomy! Keep in mind astronomy binoculars won’t allow you to see the fine detail or structure in the planets and galaxies but it will give you a clear view of large open stars clusters and extended nebulae more precisely then a telescope would.

If you have some previous knowledge on them you already know that there are two types of prisms that can be used, Porro or Roof prism but of course one will better serve each activity. That being said; what type of prism is right for astronomy? Is there a glass type that would be more fitting for this activity? The answer is just below!

The image sharpness the Porro prism provides distinguishes it as the prism to be used for astronomy rather than the Roof prism; which is more compact and a better fit for activities that require longer time of use, such as hunting, bird watching etc.

Magnification signifies the degree in which the object is enlarged. In any optic specification you will see that there are two numbers with an “x” in between such as 7×50. The first number you see, including the x represents the magnification. Knowing how you will use your instrument will help you select the proper magnification. The first thing to keep in mind is that the larger the magnification the more difficult it is to hold the instrument and that the shakiness of your hand will cause images to be less clear. In this case a tripod must be used for optimal vision. If you would like to handhold the instrument it is suggested to keep the magnification below 10x-12x. Although, with the proper combination of objective size, an instrument between 7x and 12x will show you an immense amount of star clusters, nebulae and some galaxies! A magnification between 15x – 20x will need to be mounted on a tripod. Of course this will give you much more detail of the stars and planets, but will not own up to the same level a telescope would.

The second number in the instrument specification is the objective lens. This means that it presents the diameter of the objective lens or the front lens, which are the lenses further from your eyes. In the example 7×50, the binoculars have 50 millimeter in diameter objective lens. Why this would matter to you is because the aperture determines the ability your instrument has to gather light. The larger the objective lens the brighter the image and in this case will allow you to see fainter stars and more details. The 7×50 would be the easiest instrument to use and is one of the more popular ones. It gives a good view on extended open clusters and nebulae and can still be handheld. Some instruments come with an objective lens of 60mm or more; these are called ‘Giant Binoculars’ and can be very hard to hold for long periods of time. The 10×70 or 11×80 will give you more details than what can be seen with a 7×50 and maintain the same image brightness. Most observes prefer to use a tripod with giant binoculars as some with magnifications over 15x combined with objectives of 80mm or more can compete with small telescopes in image clarity and definition. The advantage here is that you can use both eyes to look at the sky rather than one eye with a telescope. The only disadvantage with the giant instruments is that the magnification is fixed. Another specification you will find along with the magnification and objective lens is the exit pupil. It is the size of the circle of light visible at the eyepiece. The exit pupil is signifies how bright objects will appear in low light conditions. It can be calculated by diving the object lens diameter by the magnification, and the higher the number the brighter the image. The best exit pupil for astronomy would be 5 and above.

Now if you have decided on an instrument with a magnification higher than 10x or 12x and an objective lens of 70mm or more, a mount is definitely needed! Choosing the right mount for your instrument is important to getting the best quality view you want. Naturally, the bigger the instrument the bigger the mount that is needed. An instrument with 80mm objective lens could use a heavy-duty camera or video tripod. Also, some with 100mm could use the same tripod, as long as the head has no slop when it is locked. This is because the object will disappear from the Field of View if the astronomy instrument sags in the mount when you let it go. This is why the very heavy ones should be supported by something more permanent as it won’t let the image get out of the field of view. When choosing a tripod you must see the load capacity the tripod can handle and compare it with the binocular of your choosing. This number is not standardized nor will it provide you will a measurement of how well it will work with larger instruments, but it is a step in the right direction to the proper tripod. As a general know; for instruments with a 80mm objective lens, find a tripod with the capacity minimum of 12lb. Of course the bigger the capacity the better, so if you could find a 15lb minimum capacity, it will serve you better. Another specification you should look out for is the weight of the tripod itself. If the tripod weighs the same amount as the binocular, you will have issues with loading the instrument. A trick to learn is that if you sit while using the instrument on the tripod, it will increase the stability because it won’t have to be mounted so high. The last thing to watch out for is the release plates. They are a convenient feature to have, but if they are not tight they will cause a sag in the mount, which will cause the image to be out of the field of view every time you let go of the instrument. If you want to get the cheaper option, get a model without the QR plates.

For astronomy use, the close focus is not an issue that needs to be addressed. Only if you want to use you astronomy binocular in the day, will you need to look into the close focus. You will notice that the giant instruments lack greatly in the close focus department. In astronomy, there isn’t much in the way of focusing making the individual eyepiece focus practical for use. It is easy to seal against dust and moisture, and has fewer moving parts. On the other hand, when there is a need to refocus, the Center focus is easy to use and allows you to use your instrument in many more occasions than just for astronomy.

What else to look out for

Your stargazing, galaxy-watching adventure is about to start! Now that you have read this guide, it will be much easier for you to purchase your very own astronomy optic. If you find yourself in need of a tripod to go along with your new optic and not sure what to look for, you can find our “How to Buy Astronomy Binoculars Tripod” guide helpful.